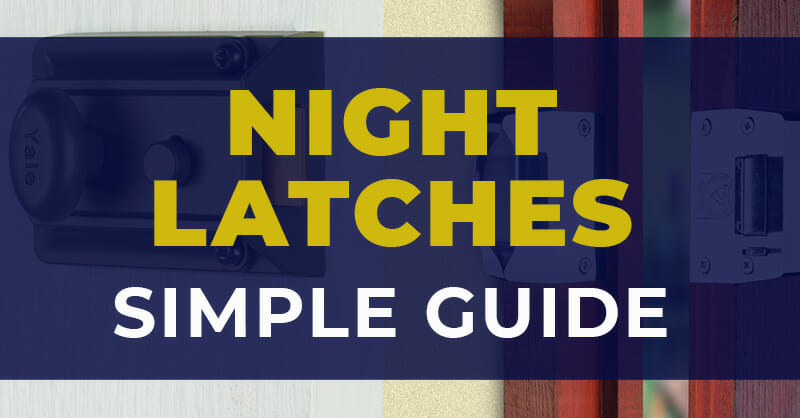 Our Night Latch guide covers what night latch door locks are, the advantages/disadvantages of each nightlatch type & what the best night latch to secure your home is.

We will also tell you what lock standards to look out for each nightlatch type.

A Night Latch (Yale Lock) is a lock commonly found on home front doors; they are mounted to doors that open inwards and mounted to the inner surface of the door.  When the door is closed the night latch automatically latches the door shut.

The door can be kept from latching closed by keeping the door ‘on the latch’, a phrase you may have heard of.

Night Latches are very simple security they are very easy to use, open the door with a key and shut the door behind you.

Also known as: you may also find a Night latch sometimes referred to as a ‘Yale Lock’ or ‘Rim lock’.

For a guide about house locks please see our types of door lock page here we cover the pros and cons of each lock.

Find a Locksmith to Fit a Night Latch

What is the most secure Night Latch to use?

The best night latch to keep your home secure would be an auto dead locking night latch that is approved to British Standard 3621,  this would automatically deadlock the door when it is closed.   Popular brands who make this high-security night latch lock would be Yale, ERA, Union.

How much does a Night Latch cost?

The price of a basic night latch could start from around £25, with a British Standard BS3621 approved night latch being more expensive starting from £80.

Night latches are relatively inexpensive as a whole, even replacement cylinders only cost from around £10.

For prices please see our locksmith price guide for changing locks or we have a put together a estimated price list of locks.

What are popular brands of Night Latch?

What are the sizes of Night Latches?

Night latches are available to purchase in two sizes, which are 40mm backset and a 60mm backset.

What size lock you require will depend on the type of door you have.

What is the backset on a Night Latch?

The backset on a night latch is the distance from the centre of the keyhole to the edge of your door, you will find most night latches will have a 60mm backset.

What is the Best Rim Cylinder for a NightLatch?

Please read our best rim cylinder guide here we also tell you what rim cylinders are and how much a replacement will cost.

Types of Night Latch/Yale Lock we will cover:

On this page we will cover everything you need to know about the below types of Nightlatch:

Is a NightLatch Secure?

Secure – A nightlatch is only truly secure if it is BS3621 Approved OR is fitted alongside a 5 lever Mortice Deadlock that conforms to BS3621.

Not Secure – A nightlatch is NOT secure if you are using a standard Nightlatch (NON-BS3621) as the ONLY lock on your front door.

Before Reading Our NightLatch Guide

Here are a few terms to know regarding Night Latch/Yale Locks that are mentioned quite a lot throughout this page, and what you might hear a locksmith mention should decide to change and fit a new Yale lock for you door.

1. Deadlocking – What it means

Deadlocking means once the door is shut, the lock can only be opened with a key.   If a burglar was to break into a home they would not be able to exit without the key.

2. Approved to BS Standard – What it means

This means the lock has been tested to a particular British Standard ( product will probably have a Kitemark on ) – having locks approved to British Standard is sometimes a security requirement by some home insurance providers.

For how to tell you have a BS3621 lock click here our guide covers everything you need to know about this popular standard of lock.

If you are thinking of changing your door locks this simple guide should help.

The below are the common types of night latches found on front doors. 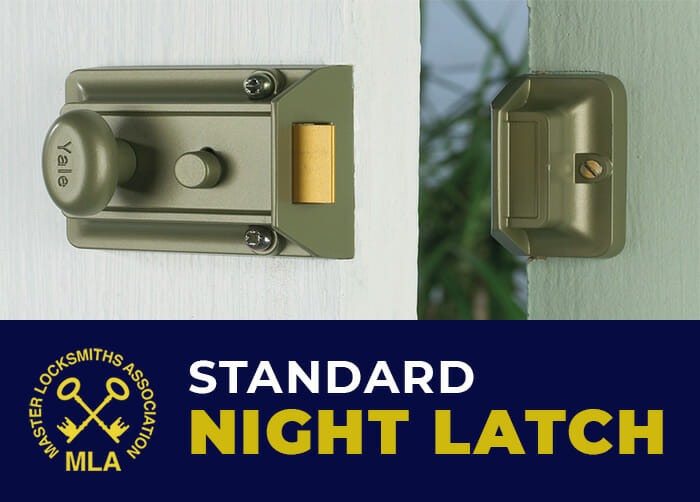 A Standard nightlatch is a simple ‘Yale’ type lock. This lock will have a basic design, with a basic cylinder. Non deadlocking means that you cannot ‘double lock’ the latch from outside with the key, stopping you from being able to open the lock from inside by the handle.

This is ideal on a property with multiple occupants or on a communal door. You do not want someone to be able to double lock the door when someone is IN the building.

A standard Night Latch is most commonly used as the entrance lock on timber doors. It’s possible to find/use on other types of doors though not as familiar.

For security a basic night latch should not be the only lock used on a door.

Standard night latches are not approved to British Standard (BS).

Security Note:  Basic night latches (non BS 3621) should always be used with a BS 3621 deadlock for security as night latches are not usually very secure.

From outside, the lock is operated by the use of a standard cylinder key (in most cases).

From inside the lock is operated by a handle that you will with pull down or twist to open the door.

Most have a snib feature that allows you to lock the latch.   Either locked closed (you can’t open the door by key or handle) or to hold the latch in the open position so the door will not lock shut.

Useful for doing something like taking the bins out but the door won’t close behind you.

Snib – Most Important part of a Night Latch

The snib is one of the most essential parts of a night latch, as it stops you from being locked out.  A snib is a button or slider on the nightlatch, this prevents the door from “slamming shut” and allows for the latch to be held. 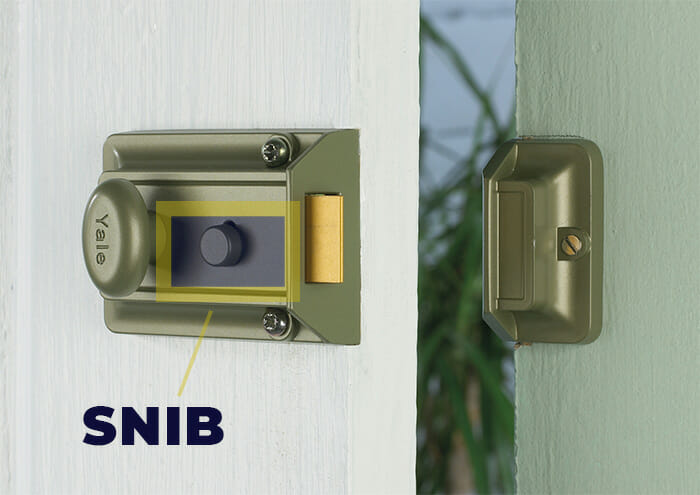 Where the Snib on a nightlatch is

If the snib is broken or damaged you could find yourself locked out of the house. 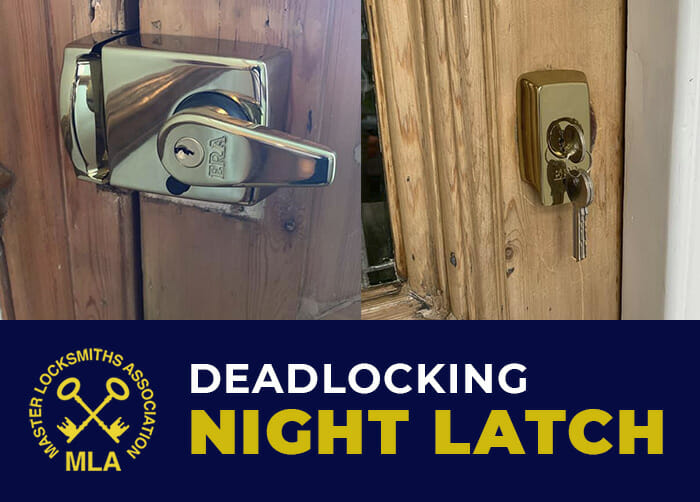 A deadlocking night latch is the same as a basic night latch, except you can turn the key on the outside one full turn (opposite to opening) that will then lock the latch in the closed position.

You will not be able to open the lock from the inside as the handle will be disabled.

Commonly used on Wooden/Timber doors for homes for entrance access.

For security a deadlocking night latch should not be the only lock used on a door.

Deadlocking night latches are not approved to British Standard (BS).

Security Note: A deadlocking night latch (non BS 3621) should always be used with a BS 3621 5 lever mortice deadlock for security.

Again a deadlocking night latch acts the same as a basic latch but with the extra feature of locking the latch with a key. 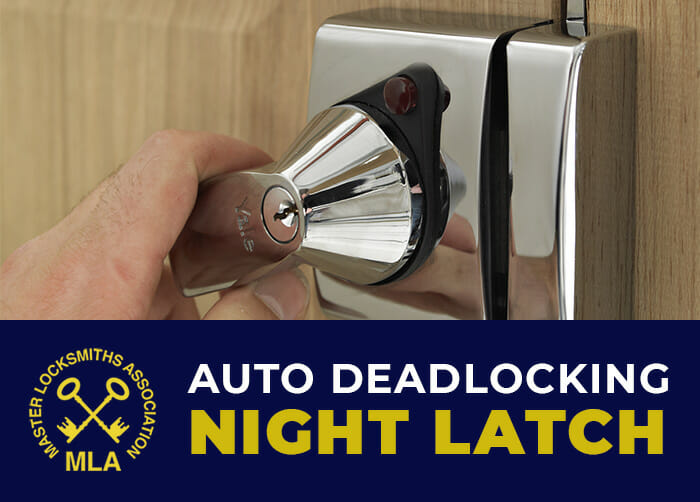 Auto dead locking night latches are deadlocked when the door is shut, which means any thieves trying to use a credit card to open your door will have no success.  Once deadlocked a key is required to open the door.

They also have the additional feature of an anti-thrust latch. As the door is shut the anti-thrust is pressed in. This stops the latch being slipped open.

The security is starting to increase with these night latches.

Commonly used on Wooden/Timber doors for homes as entrance access. 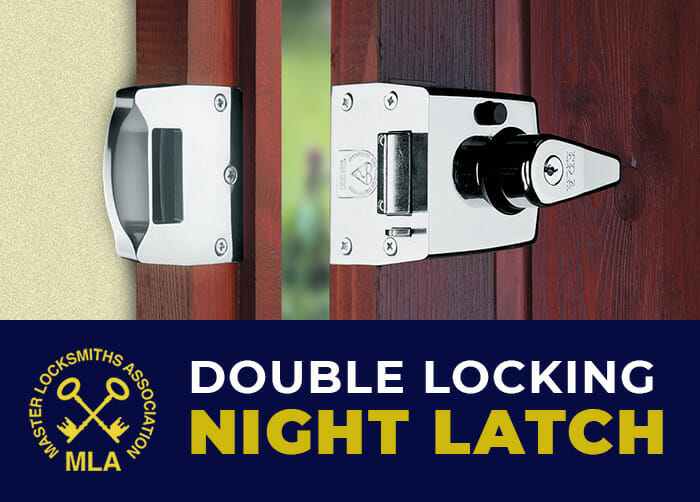 Double locking latches have the addition of a key on the inside to be able to lock the handle, these are one of the most secure night latches you can use for your door.

Again these are suitable for wooden/timber doors on domestic homes, and also glass panelled door.

Similar to the auto & deadlocking night latch, you can still open the door from inside if you lock the handle from inside with a key.

To unlock the door just use the key to unlock unlike the standard deadlocking which you cannot unlock.

Find a Locksmith near you

Rim Cylinder Lock – What is the Best & Most Secure?

Emergency Boarding Up – Can a Locksmith Help? & Approx Cost

Door Lock Types – A Simple Guide for your Home (with Pictures)

Digital Door Locks – What are they & When To Use them